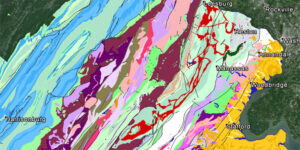 The types of Problematic Soil in Northern Virginia include Marine clay, a type of soil found in Northern Virginia that contains clay that swells in wet conditions and shrinks upon periods of drought.  This Marine Clay is called Bentonite and can cause damage to basement and foundation footer failure. You and Fairfax Contractor may find that your home was built on problematic soils that can greatly affect the stability of the structure of your home. Many homes built in Northern Virginia had their foundations built on the so-called problematic soils that exist here in our Northern Virginia area. Probably the biggest concern is Marine clay which is prevalent in many areas of the counties in Northern Virginia, to get a building permit. Marine clay is problematic because it contains a type of clay called Montmorillonite clay that will expand during periods of very high levels of rain. Yet, when we experience drought, this clay tends to shrink. The problem with Marine clay is that it can cause havoc in your home’s foundation.  clays are made up of varieties of silky and clay soils that were formed during the geological era known as Montmorillonite as the Cretaceous Potomac era. Though many people call this Marine clay just that, they were formed in our area where brackish waters deposited this soil condition many eons ago. These soil conditions cannot only cause problems internally to your home’s foundation but can also create exterior drainage issues in the yard of your home. When building an addition, new home, retaining walls, stoop, or many other structures, you may be held up from getting a building permit when you go through the site process. At this point, Fairfax Contractor may have to employ the expertise of a geotechnical soil engineer to design a plan to build on these problematic soils. Problem Soils that include the most drainage problems in Northern Virginia is clay. There are 108 unique soil types listed in Northern Virginia soil maps. When designing an exterior French drain system, soil types will dictate the ability to evacuate water from a soggy yard. No exterior drainage system design will problematic soils  Bentonite or expansive clay evacuate standing water from your yard insanity; it takes time to move the water through problem soils. The first step is to get a professional engineer to evaluate the problem soils that might be present in your Northern Virginia home.